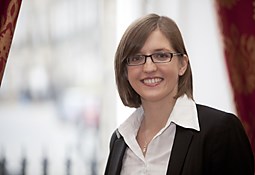 Victoria Varty (nee Wilkinson) is a partner in our Family Law team based in our Edinburgh office.  She handles all aspects of family law, including resolving financial issues which arise from the breakdown of relationships and disputes concerning children.

Victoria is regularly instructed by other solicitors throughout Scotland to deal with complex family actions raised in the Court of Session. She also has experience of litigating in the Sheriff Court and UK Supreme Court.

Victoria has a particular interest in cases with an international dimension, and specialises in cases arising from international child abduction, an area in which Drummond Miller have been described by the Chambers UK Guide as "particularly strong".  She regularly advises other solicitors across Scotland who have queries relating to child abduction cases, and is instructed by both the Scottish Government and individuals in these actions.

Victoria graduated from The University of Edinburgh in 2002 with LLB (Hons), and obtained her Diploma in Legal Practice from the University in 2004.  She joined Drummond Miller as a Trainee in 2004, and remained with the firm when she qualified as a Solicitor in September 2006. She was assumed as a partner in 2014.

Victoria is a Notary Public and a member of the Family Law Association.  She sits on the Law Society of Scotland Privacy Law Committee and the Family Court User’s Groups of both  Edinburgh Sheriff Court and the Court of Session.